This section includes a city-by-city look at the succession of bosses of the major American Mafia crime families over time. Short writeups indicate how organized crime leaders came to and lost their power (and/or their lives). This is not yet a comprehensive list of U.S. crime families. Known underworld organizations in New Jersey, northern California, eastern Missouri, Colorado, Alabama, and Chicago Heights in Illinois, are not yet represented. The occupants of the U.S. boss of bosses position are included, though this technically was not a crime family leadership position. 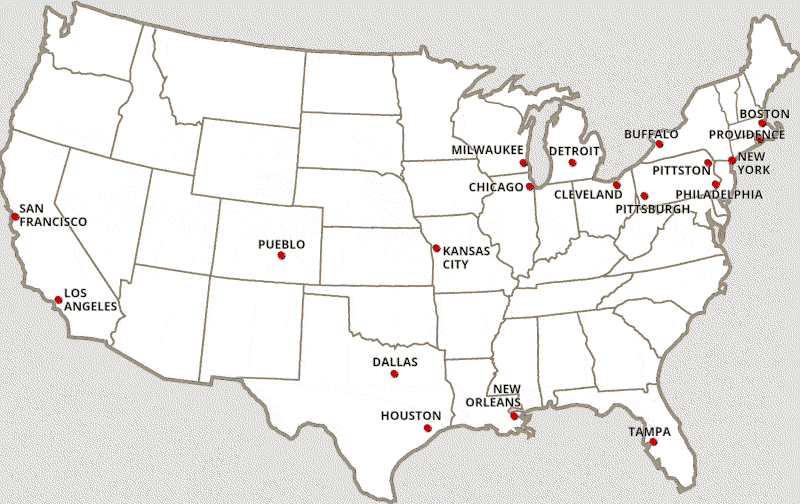 It is probably a mistake to label a single individual as the sole Mafia boss of a larger American city before about 1930. In earlier times, Mafia "family" organization was based more on Sicilian hometown allegiance than on American location. So, U.S. mafiosi from Corleone, Castellammare del Golfo, Bagheria, etc., had organizational hierarchies that spanned U.S. cities and regions and often overlapped the territories of other Mafia organizations. (A larger U.S. city might have one boss over its Terrasini mafiosi, another over its Salemi mafiosi and another over its Castellammare mafiosi.) Our regional boss designations from this period are generally intended to indicate the individuals who were apparently the most powerful in their local regions.

The Prohibition Era provided enormous cash incentive to consolidate Mafia organizations within U.S. regions. This was done through the establishment of regional councils of bosses, as Nicola Gentile described for Pittsburgh, and/or through underworld warfare, as seen in New York, Chicago, New Orleans, Detroit, Philadelphia, Los Angeles... The Castellammarese War of 1930-1931 illustrated the hazard of overlapping Mafia organizations and underworld allegiances that extended outside of defined U.S. regions. Some crime family mergers were achieved through the violence of the war. Chicago, Detroit, Cleveland and Pittsburgh appear to have emerged from the war with united regional crime syndicates in place. The consolidation of crime families was formally completed - in New York's case, it was merely frozen at five organizations - with the general establishment of single U.S.-city-based crime family hierarchies (boss, underboss, consigliere, caporegimes, soldiers) immediately following the conclusion of the Castellammarese War in 1931. It appears that the divisive influence of U.S. Mafia organizations' continuing relationships with their original Sicilian counterparts was officially eliminated a short time later, coinciding with the formation of the U.S. Mafia dispute resolving "Commission."