As in western Florida and eastern and central Texas, the early Sicilian-American underworld of southern California was formed by expansion of Mafiosi from the New Orleans area - directly and also through a Mafia organization in southern Colorado. The earliest Mafiosi in the region seem to be those who emigrated from the Sicilian region of Monreale-Piana dei Greci in the Province of Palermo. These included members of the Matranga, Ardizzone and Cuccia families. Corleone Mafia families with ties to New Orleans and to New York City - like the Dragna family - arrived a bit later and became dominant. Over time, the southern California Mafia resisted apparent incursions from criminal organizations in Chicago and Cleveland. 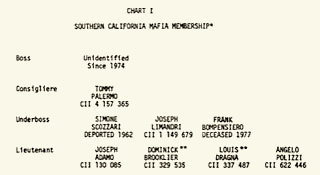 1906 - Joseph Ernest Ardizzone (Nov. 1884 to Oct. 1931). Ardizzone is widely regarded as the first Mafia "boss" in the Los Angeles area. He reached Los Angeles in 1901, after first settling in New Orleans, and he became a wealthy and politically connected rancher in the Los Angeles suburb of Sunland. There was little unity in the Sicilian underworld of southern California at the time. Competing families engaged in near-constant feuding from the 1890s into the 1930s. Ardizzone may have become the most powerful leader in 1906, following the murder of rival George Maisano by Ardizzone (who was acquitted when witnesses refused to testify against him) and the apparent vendetta slaying of Ardizzone's cousin Joseph Cuccia by a Maisano relative. Cuccia was regarded as a powerful leader, and Ardizzone may have inherited command upon Cuccia's death. Factions lingered and continued to compete. Ardizzone and his local rivals may have been forced to give ground when Vito DiGiorgio was installed as regional leader around 1920.

1920 - Vito DiGiorgio (Mar. 1880 to May 13, 1922). DiGiorgio moved into southern California before 1920 from an earlier base of operations in New Orleans. (After his move west, he retained his home and perhaps his underworld stature in his hometown of New Orleans.) Given the timing and the speed of his ascension to boss status on the West Coast, his move may have been ordered by reigning Mafia boss of bosses Salvatore "Toto" D'Aquila. By the early 1920s, the Los Angeles-based DiGiorgio was the dominant figure in southern California's Sicilian underworld. Soon after his arrival, he was targeted by assassins. He suffered gunshot wounds in an attempt on his life in July 1921. (Mafia chronicler Nick Gentile visited with DiGiorgio shortly after this shooting.) DiGiorgio attended a Mafia convention in Buffalo, New York, in the spring of 1922. As he and companion Giovanni LoCascio headed home, they stopped to visit Chicago. On May 13, 1922, both men were murdered in a poolroom/barbershop on Chicago's Larabee Street.

1922 - Ardizzone emerged once again as the most powerful Sicilian underworld figure in the years following the murder of Vito DiGiorgio. In the mid-1920s, Ardizzone and Ignatius "Jack" Dragna formed a curious organization known as the Italian Protection League. Dragna was president of the league, and Ardizzone was treasurer. At that time, local Mafia leaders were seeing incursions from outside elements, such as Chicago's Dominic DiCiolla, aligned with the Genna Gang. It is tempting to view events in this period as somehow related to the struggle between boss of bosses Salvatore D'Aquila and the Masseria-Morello combination in New York City and the subsequent start of the Castellammarese War. (Chicago colonization in California may be the foundation of Bonanno's story of Masseria negotiating with Joe Aiello of Chicago around 1928, and offering Aiello control of all territory west of Chicago.) Early in 1931, Dominic DiCiolla, regarded by authorities as boss of the Italian liquor rackets, was shot to death. As DiCiolla was buried, Ardizzone was targeted by assassins. He suffered serious gunshot wounds. His driver Jimmy Basile was killed.

1931 - Ignatius "Jack" Dragna (April 18, 1891, to Feb. 23, 1956). With support from some allies in the East and Midwest, Dragna brought order to the small Mafia clans in southern California following the sudden disappearance of his old ally Ardizzone in October 1931. (Authorities speculated that Ardizzone was eliminated by his own men.) After Prohibition, Dragna moved conservatively into gambling, operating off-shore gambling ships. Eastern and Midwestern crime families took advantage by staking claims in regional rackets. In 1950, Dragna appointed Frank Bompensiero to run underworld affairs in San Diego. That turned out to be a costly move, as "Bomp" became a federal informant. While he was generally an effective underworld boss, Dragna is best remembered for his failures. He failed to eliminate competitor Mickey Cohen, despite repeated assassination attempts in the late 1940s and early 1950s. (Cohen died of natural causes in 1976). He also failed to stake a claim in lucrative gambling operations in nearby Las Vegas.

1956 - Frank DeSimone (1909 to Aug. 4, 1967). Attorney DeSimone became the Los Angeles Mafia boss after the 1956 death of Jack Dragna. DeSimone was the son of early southern California Mafioso Rosario DeSimone, who had been a lieutenant to Vito DiGiorgio. He was born during his parent's stay in Pueblo, Colorado. His underworld career was notable for its overlap with his legal career and also for his repeated failed attempts on the life of Los Angeles gambling racketeer Mickey Cohen. Frank DeSimone had barely taken office as boss when he was noted by law enforcement as an attendee at the 1957 Apalachin, New York, underworld conference. Some confuse Frank DiSimone with Simone Scozzari, an aging underworld leader from the same time and place who also attended Apalachin.

1967 - Nicolo Licata (Feb. 20, 1897, to Oct. 19, 1974). DeSimone died on Aug. 4, 1967, of natural causes. Burbank cafe manager Nick Licata, who had served as a front man for Jack Dragna, stepped up as the new boss. Licata had been a suspect in the 1951 assassinations of two Kansas City mobsters (Tony Brancato and Tony Trombino) on a Hollywood street. He was related by marriage to William Tocco, one of the top men in the Detroit Mafia. Licata's underboss was Joseph Dippolito. From the time of his election as boss, Licata was under siege from law enforcement authorities and threatened by the westward expansion of Cleveland mobsters. He controlled the L.A. Mafia for seven troubled years until his own death.

1974 - Dominic Brucceleri (1914 to 18 July 1984). Also known as Dominic Brooklier and as Jimmy Regace. Brucceleri joined the Dragna mob around 1947 after moving west with a fellow Midwest gangster. His California career began badly, as it seems he was responsible for some of the botched attempts on the life of Mickey Cohen. Brucceleri took over the boss role after the death of Nick Licata.

1977 - Frank Bompensiero (1905-1977), the Milwaukee-born mobster who led Mafia rackets in San Diego, California, while also secretly providing information to federal agents, was murdered on Feb. 10, 1977. L.A. gunman Thomas Ricciardi was believed to have performed the hit. Turncoat mobster Aladena "Jimmy the Weasel" Fratianno revealed that Bucceleri, Samuel Sciortino and Louis Dragna determined that Bompensiero was informing on their activities and needed to be killed.

1979 - Brucceleri surrendered much of the day-to-day administrative responsibilities when he and underboss Mike Rizzitello (a New York transplant) were prosecuted.

1984 - Peter John Milano (Dec. 1925, to Apr. 2012), owner of the Rome Vending Company of San Fernando Valley, became the new boss of the southern California Mafia in 1984. At that time, Brucceleri died in federal prison. Jack LoCicero, a leading figure in the organization under Brucceleri, was unable to serve as boss due to advancing years and declining health. Peter John Milano, possibly a nephew of former Cleveland boss Frank Milano, worked closely with his lieutenant Luigi Gelfuso, Jr., to rejuvenate the criminal society. He opened membership rolls and moved into new rackets. The organization was desperate to fend off regional incursions by mobsters from New York and Chicago and to extract protection payments from bookmakers and narcotics peddlers. In October, 1984, Milano and nineteen other alleged organized crime figures were arrested and charged with conspiracy to control bookmaking in the region. Federal charges followed in spring of 1987. Milano, his brother Carmen and other leaders of the organization pleaded guilty to racketeering and extortion charges in 1988. The sixty-three-year-old Milano was sentenced to six years in prison. Law enforcement officials stated that the sentences effectively put the Los Angeles Mafia out of business.