What was the "boss of bosses" position in the American Mafia? The "boss of bosses" (capo dei capi) was an institution of the American Mafia between the early 1900s and September of 1931. Under the system, one Mafia chieftain - typically the leader of the largest and most powerful crime family - was voted to serve as supreme arbiter of Mafia quarrels. The selection process was less an election to authority than a recognition of existing overwhelming strength. The boss of bosses held the power of life and death over Mafia bosses and members, as dispute resolution often involved the sanctioned murder of the party deemed to have acted in violation of underworld codes. The system overlooked the fact that bosses were typically power-hungry, greedy and ruthless and might hold secret interests in the disputes brought before them. The reigning boss of bosses was in a position to enrich himself, elevate his friends and exterminate his rivals. 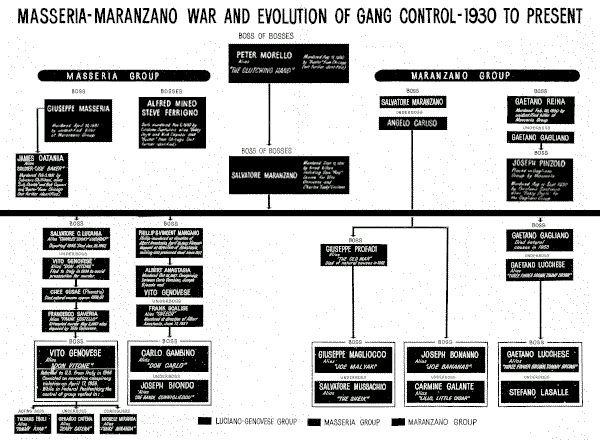 Federal investigators of the early 1960s identified only two occupants of the boss of bosses role. (Click for enlarged view.)

What were the problems inherent in the boss of bosses role? In practice, the boss of bosses was something more than a judge or mediator. From the first known occupant of the office, Giuseppe Morello, there is evidence that the boss of bosses was actively engaged in the activities of local crime families across the country. Several holders of the title passed death sentences against rivals and inserted their own loyal followers into crime families to act as spies and/or enforcers. While it appears that a vote of underworld bosses or the assembled Mafia membership was necessary in order for the boss of bosses to act outside of his official dispute-resolution role, such votes were generally no more than formalities. With the boss of bosses commanding the strongest and most influential Mafia family, as well as life-and-death dispute resolution authority, it would have been suicidal to vote against him. Interestingly, it also proved to be suicidal to assume the boss of bosses responsibilities. Replacement of the position holder by democratic means was a virtual impossibility. Betrayal and assassination proved to be the only effective means of changing the capo dei capi regime. Every "full" boss of bosses known to us was based in New York City and every one died a violent death.

How and when was the boss of bosses dispute-resolution system replaced? The supreme arbiter position was nearly abandoned in favor of a representative panel following the assassination of Giuseppe Masseria at the conclusion of the Castellammarese War in spring 1931. Salvatore Maranzano succeeded in continuing the role and in winning election to it. Maranzano and the boss of bosses position survived only a few months longer. When Maranzano was found to be plotting against crime family bosses - an act that could have started a new Mafia war - he was assassinated and a representative "Commission" was installed to resolve inter-family disputes. 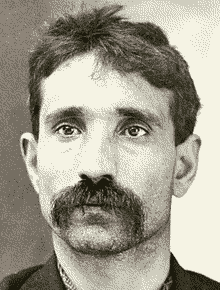 c1901 - Giuseppe Morello (Born Corleone, Sicily, May 2, 1867. Killed New York City, Aug. 15, 1930). Known as "Piddu" or "Clutch Hand" (in erroneous reports as "Peter"), Morello and his brother-in-law Ignazio Lupo led a gang of extortionists and counterfeiters in Italian East Harlem, Manhattan's Lower East Side and Brooklyn. With the support of Sicilian/American Mafiosi like Vito Cascioferro and Pasquale Enea and with strong connections to Mafia organizations in New Orleans and Chicago, Morello was recognized as boss of bosses of the U.S. Mafia, perhaps the first man to hold that title. (Some have argued that Nicola Taranto and perhaps Candelaro Bettini, leaders of late 19th Century Sicilian-American counterfeiting rings, may have held the boss of bosses title earlier than Morello.) Morello and Lupo both were imprisoned in 1910 for counterfeiting. The components of the Morello-Lupo underworld alliance subsequently broke down into what became the Genovese (based in Manhattan), Gambino (Brooklyn, Bronx) and Lucchese (Bronx) Crime Families.

c1910 - Sebastiano DiGaetano was identified by an informant to the U.S. Secret Service as a key administrative figure over the New York Mafia during the first years of Morello's imprisonment. It is possible that he temporarily held the boss of bosses title until Morello-Lupo legal appeals failed and a new election could be held. DiGaetano appears to have been leader of the Brooklyn-based organization that later evolved into the Bonanno Crime Family. In March of 1912, DiGaetano reportedly "lost his nerve." He was replaced as crime family boss by Nicola Schiro and as boss of bosses by the election of former Morello lieutenant Salvatore "Toto" D'Aquila.

c1912 - Salvatore D'Aquila (Born Palermo c. 1873. Killed New York City, Oct. 10, 1928). Known to his underworld associates as "Toto" (for some reason, Bonanno referred to him as "Tata"), Palermo-born D'Aquila reportedly rose through the ranks of the Morello Mafia. Originally based in the Bronx, and later a Mafia leader in Brooklyn, he secured the loyalty of a number of key pieces of the old Morello organization when it became clear that legal appeals by Morello and Lupo would not win them their freedom. D'Aquila was elected the new boss of bosses of the American Mafia, but he was unable to hold in line the various factions of the old Morello organization. He lost control of East Harlem and lower Manhattan. In an effort to increase his influence, D'Aquila is known to have inserted spies into various crime families across the country and to have ordered the deaths of those Mafia leaders deemed disloyal. After Morello's release from prison (and likely speculation over whether he should be returned to his old position), D'Aquila created a schism in the New York Mafia by passing a death sentence against Morello and his loyalists. Though the D'Aquila crime family is often said to have been based in Brooklyn, the powerbases of D'Aquila and his two immediate successors as crime family boss actually were in the Bronx. Around 1925, after suffering defeats at the hands of the Morello-backed Giuseppe Masseria, D'Aquila left Brooklyn to return to his Bronx roots. He appears to have held onto the boss of bosses title until his 1928 murder. 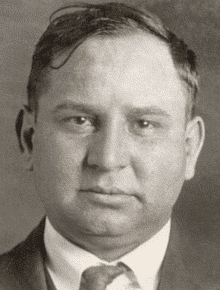 1928 - Giuseppe Masseria (Born Menfi, Sicily, Jan. 17, 1886. Killed Brooklyn, April 15, 1931). "Joe the Boss" Masseria, once a member of a lower Manhattan burglary ring, became standard-bearer for the remnants of the Morello-Terranova organization around 1922. A non-traditional Mafioso, Masseria welcomed many Neapolitans into his criminal organization. By the mid-1920s, Masseria was dominant in New York City. Masseria officially became boss of bosses after D'Aquila's murder in 1928. The 1928 convention of Mafiosi in Cleveland (revealed by the arrests of Mafia leaders at the Hotel Statler), where much of Masseria's family resided, was likely held as a coronation of Masseria as the new supreme leader of the American Mafia. Among Masseria's chief advisers were former boss of bosses Giuseppe Morello and former D'Aquila aide Saverio Pollaccia. Underworld forces in New York, Chicago, Detroit and Cleveland supported Joe the Boss in his 1930-1931 struggle against Salvatore D'Aquila and his many allies. 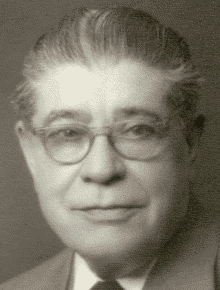 1930 - Gaspare Messina (Born Salemi, Sicily, Aug. 7, 1879. Died June 1957). Messina appears to have entered the U.S. through New York City and to have lived in Brooklyn for a time before moving on to Boston. (A close relationship between the New England and Brooklyn underworlds lingers to this day.) A son Salvatore was born in Brooklyn to Messina and his wife Francesca Riggio Messina in January of 1911. He moved to Boston before 1918. He may have been one of the D'Aquila men inserted into crime families across the country, but he later showed considerable independence from D'Aquila. He served as a Boston-based Mafia rappresentante - a term that has become synonymous with "boss" but may have held different responsibilities in that time - through much of the Prohibition Era. A dispute with Castellammarese Mafiosi in New York, Buffalo and the Midwest cost Giuseppe Masseria the confidence of the American Mafia membership. While the criminal society attempted to resolve the problem, Messina served as temporary boss of bosses. It is possible that Messina was no longer a leader of the Mafia in the Boston area and that he resided in New York City during his brief reign as temporary boss of bosses. As the Castellammarese War concluded with the April 15, 1931, assassination of Masseria, Messina's term as boss of bosses ended.

1931 - Salvatore Maranzano (Born Castellammare del Golfo, Sicily, c. 1886. Killed New York City, Sept. 10, 1931). Beginning in the late 1920s, Maranzano led a Castellammarese Mafia insurrection against boss of bosses Giuseppe Masseria. Though there is no evidence that Maranzano was ever officially appointed to any rank higher than soldier within the Schiro clan, he became the New York City war leader of the Castellammarese in the U.S. and many other Mafiosi who opposed the tyrannical reign of Giuseppe Masseria, including D'Aquila loyalists from the Mineo Crime Family (later Gambino). After the April 1931 assassination of Masseria, Salvatore Maranzano defeated a plan to install a mediating panel atop the U.S. Mafia and secured for himself the designation of boss of all bosses in the American Mafia. There is some difference of opinion as to whether Maranzano commanded a Mafia "Family" during his boss of bosses reign. Bonanno indicated that Maranzano was chief of the former Schiro clan (later Bonanno Family). Valachi reported that Maranzano separated himself from the typical crime family structure and maintained only a troop of loyal soldiers, considered a form of palace guard (Valachi was part of that guard). Maranzano made repeated demands of tribute from other Mafia bosses and plotted against those he considered his rivals, including Salvatore "Charlie Luciano" Lucania. Fearing that Maranzano's pettiness would lead to yet another mob war, some trusted aides betrayed the new boss of bosses. Following Maranzano's September 1931 murder on orders from Lucania, the American Mafia decided to do away with the boss of bosses designation in favor of a dispute-arbitrating Commission.