Abner "Longie" Zwillman, fifty-three-year-old veteran New Jersey rackets boss, was found dead in his West Orange home on February 26, 1959. That morning at 10 o'clock, his wife Mary discovered his lifeless body. It was suspended from its neck by a loop of electrical cord tied to a ceiling beam in a basement storage room of their stately residence. A half-empty bottle of bourbon whiskey was found nearby. 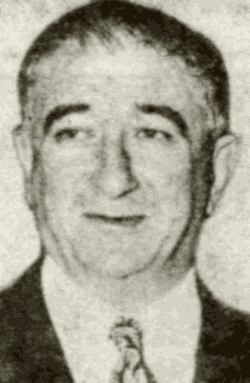 Mrs. Zwillman told police she recalled her husband getting up in the middle of the night complaining of chest pains. He responded to her concern by having her take a sleeping pill and return to bed.

Essex County Medical Examiner Dr. Edwin Albano almost immediately ruled the death a suicide by hanging. He also reported that Zwillman had kidney disease and an enlarged heart. (He had been seeing a heart specialist for some time.)

Zwillman's stepson John Steinbach revealed that the racketeer had been depressed and worried about a jury bribery case relating to a 1956 tax evasion trial that ended with a hung jury. Zwillman had reportedly battled deep depression since 1950, when Senate investigators recently began examining his role in the jukebox and coin-operated vending machine industry.

Steinbach said Zwillman was troubled by the questioning of Mafia big shot Gerard Catena two weeks earlier. Catena, one of the New York-area Mafiosi who had been a longtime Zwillman business partner, took the Fifth Amendment more than seventy times.

Note: The current version of Wikipedia's bio on Zwillman (as of Feb. 26, 2019) indicates his death occurred on Feb. 27, 1959. That is an odd error (or a remarkable bit of journalistic prescience), as the source cited for the death info was published a day earlier on Feb. 26.
- Tom Hunt
Moderator
Top
Post Reply
1 post • Page 1 of 1