Charles "Lucky" Lucania (later known as Charlie Luciano) was staggering along Hylan Boulevard at Prince's Bay just outside Tottenville, Staten Island, on the morning of October 17, 1929. Patrolman Blanke of the Tottenville Police Station took notice. Blanke saw that Lucania, a known Manhattan racketeer, had a badly bruised and swollen face and several knife wounds in his back. 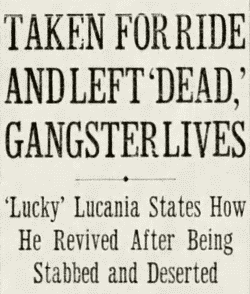