One of the vigilante gunmen involved in the 1891 Mafia lynchings in New Orleans reported that he subsequently spotted a number of New Orleans Mafiosi doing business in Tampa, Florida. George Parke did not specifically identify the Mafiosi. However, if they were members of the organization targeted by the 1891 lynchings, they would have been linked with the Matranga family, leaders of a Mafia faction originating in the Monreale-Piana dei Greci area of Sicily and known as "Stuppagghieri" or "Stopagherra." Over time, Tampa became home to greater numbers of Sicilians from the area of Santo Stefano Quisquina, in the Province of Agrigento, and Mafia leaders originally from Santo Stefano and its neighboring communities became prominent. 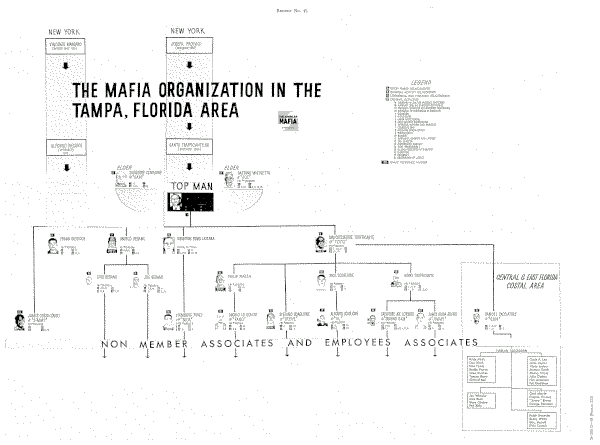 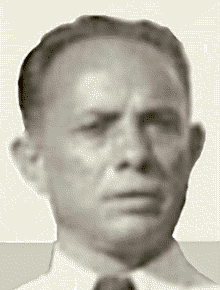 1900 - Ignazio Antinori (Feb. 17, 1885, to Oct. 23, 1940). Antinori was born in Santo Stefano Quisquina, Sicily, and traveled to the United States late in 1899. He entered the U.S. through New York City and proceeded south to the Tampa area. A core group of Mafia leaders in the region's Santo Stefano colony formed around Antinori. Antinori was a central focus of the Santo Stefano Mafiosi through their late Prohibition Era conflict with the local gambling gang of Charlie Wall.

The U.S. Narcotics Bureau apparently believed Antinori took on far greater foes than Charlie Wall. In early 1947, Col. George White of the bureau accused Salvatore "Charlie Luciano" Lucania - then under arrest in Havana, Cuba - of ordering the 1940 slaying of Antinori as part of his effort to establish an orderly narcotics and vice network across the United States. Col. White did not reveal any evidence supporting his assertion.

Ignazio Antinori's son, Joseph, reportedly followed his father into the Tampa Mafia. He, too, met a violent end. He was shot to death in a Tampa tavern on November 4, 1953.

1903 - Ignazio Italiano (1860 to Aug. 11, 1930) and Santo Trafficante, Sr., (May 28, 1886, to 1954), seen at right, had joined Ignazio Antinori in the Tampa area by this time. Like Antinori, Italiano was from Santo Stefano Quisquina. Trafficante was born in Cianciana, a short distance inland from Santo Stefano in the Province of Agrigento. (Trafficante's wife was born in Santo Stefano.) The three men appeared to share underworld executive power, with Italiano likely serving as chief for a time. Trafficante apparently was supported by Mafiosi from the Diecidue family, also originally from Cianciana.

1920s - With the arrival of U.S. Prohibition, local Mafia leaders became politically connected through regional racketeer Charlie Wall (who later became an adversary). The leaders also attained importance on a national level due to their access to Cuban rum. Santo Trafficante Sr. and his aide Antonio Diecidue are known to have made at least one trip to Havana in 1926. 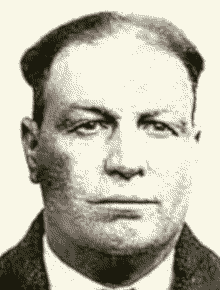 1920s - Gaetano Zummo (c1892, to June 6, 1956) and Giuseppe Vaglica (June 16, 1893, to July 11, 1937), both of Monreale, Sicily, became influential underworld leaders in Tampa in the early Prohibition Era. They may have commanded remnants of the earlier Monreale-based Mafia there. Both men traveled extensively across the U.S. and had many underworld connections. While the Santo Stefano and Monreale Mafia organizations in the Tampa area may have remained distinct through this period, some believe Gaetano "Thomas" Zummo became part of a shared Tampa underworld leadership group.

Zummo spent considerable time in New York - residing in the Bronx for years - before relocating to Florida during the later Prohibition period and opening Maria's Pizza Restaurant, 907 Tampa Street in Tampa. In the early 1950s, he opened Columbus Restaurant at 215 E. Lafayette Street in the city. Zummo died while vacationing with his sister Vincenza in Palermo, Sicily. The two Zummos and their relative, Palermo resident Gaetano Prestigiacomo, reportedly died in a nighttime single-car crash on June 6, 1956. Gaetano Zummo's death was recorded by the American Foreign Service in Palermo on June 13. The service noted Zummo's official cause of death was a fracture at the base of the skull. It indicated that his remains would be transported back to the U.S. for burial by his son Salvatore "Sam" Zummo of Rhinelander Avenue in the Bronx. Funeral services were held June 18.

1928 - Ignazio Italiano and Vaglica served as representatives of Tampa's Mafiosi at a Sicilian-American underworld convention held in Cleveland, Ohio. This could indicate that the Tampa Sicilian underworld organizations with origins in Santo Stefano and Monreale had merged or that the two men were bosses of still-distinct organizations. Italiano, Vaglica and more than twenty of their Mafia colleagues were arrested on suspicion, photographed and fingerprinted when Cleveland police discovered them at the Statler Hotel on December 5. It was learned that Italiano was closely acquainted with New York Mafia big shot Giuseppe Profaci. Italiano had been acquainted with Profaci's father in Sicily and did business with Profaci's olive oil importing company in the United States.

Writers of Wrongs: Caught in Cleveland - 1928 arrests at Hotel Statler

1930s - Santo Trafficante Sr. was regarded as the leading figure in the Sicilian underworld of Tampa as the Prohibition Era drew to a close. Ignazio Italiano died in August 1930 at the age of seventy. (Some in the Italiano faction reportedly were less than eager to accept Trafficante as leader and remained so into the next generation.) Ignazio Antinori remained influential. Trafficante and Antinori resided close to each other in Tampa and may have been boss and underboss at this time.

1937 - Additional local underworld power fell into Trafficante's hands when Giuseppe Vaglica was murdered in July 1937. Though Prohibition was over, Trafficante's income was guaranteed by his dominance in gambling rackets - particularly Tampa's "bolita" numbers-type game - and his connections in Cuba proved valuable to the U.S. Mafia network, as investments were made in Havana-area vice establishments.

1940s - Salvatore "Red" Italiano and James Lumia became prominent in the Tampa Mafia as Santo Trafficante Sr. sought to operate from the background. On Oct. 23, 1940, Ignazio Antinori was shot to death, likely as a result of a growing feud with Charlie Wall. Repeatedly targeted for assassination, Wall began providing information on the Tampa rackets to federal investigators in the mid-1940s.

1950 - James Lumia (Sept. 10, 1903, to June 5, 1950) was a highly regarded member of the old Italiano faction, working closely with Salvatore "Red" Italiano. Lumia may have seized power in the Tampa underworld briefly during the absences of Santo Trafficante Sr. and Salvatore Italiano. Lumia was murdered in 1950.

1954 - Santo Trafficante, Jr., (Nov. 15, 1914, to March 17, 1987), became Tampa Mafia boss upon the death of his father. The Italiano faction in Tampa found the situation intolerable. Antonio Italiano and Dominic Ferrara reportedly went to New York Mafia bosses with a complaint. The Trafficante connection with New York was strong and lucrative, however. The complaint was ignored and Italiano and Ferrara were never seen again.

Santo Jr. was frequently in Havana, Cuba, managing Mafia investments in gambling casinos and other rackets. Those investments were lost when Trafficante was unable to make arrangements with the regime of Cuban revolutionary leader Fidel Castro after 1959. For a time, Trafficante and other Mafia leaders worked with American intelligence agencies to plot the overthrow or assassination of Castro.

1986 - Trafficante was unsuccessfully tried by federal prosecutors for racketeering and conspiracy. The following year, he was charged with taking kickbacks from the International Laborers Union dental and eye health care plans. He died, following a bypass operation at the Texas Heart Institute in Houston, before he could stand trial.

1987 - Frank Diecidue (Feb. 20, 1915, to Oct. 19, 1994). Diecidue, member of a clan long loyal to the Trafficantes, is believed to have been part of a leadership group in the Tampa Mafia from the time of Trafficante's death until his own death seven years later. Some sources indicate that he served as front man for another big shot. During this period, Steve Raffa (Oct. 2, 1941, to Nov. 16, 2000) gained control of the family's wing in the Miami area. Raffa died of an apparent suicide in 2000 while awaiting trial on racketeering, loansharking and gambling charges.